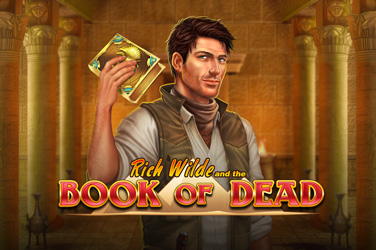 With a theme that has strong echoes of classic Egyptian thrillers like The Mummy, this game follows Rich Wilde's Pursuit of the Ancient Book of Dead. Powerful and esoteric, the Book of Dead holds untold mysteries and is the ultimate prize for any archeological adventurer!

This slot machine was developed with the player in mind. With detailed 3D graphics, intense gameplay and an immersive storyline, Rich Wilde and the Book of Dead offers thrills, surprises and some huge payouts.

And it plays just as well on mobile and tablet as it does on desktop. Are you ready to enter the realm of the dead and try your hand as an adventurer's henchman? Then let's start digging!

There are many Egyptian themed slot machines. Some are more successful than others and you can definitely see the influence of the Novomatic classic Book of Ra when you start playing Book of Dead. But we would say that the graphics here are more polished and better than in this game, classic as it is.

We would even go so far as to say that the Book of Dead takes Book of Ra-style graphics to a new level, bringing a whole new level of authenticity and detail to the genre. In short, this game looks stunning and pulls you into the game as soon as you press the green spin button.

Much attention has been paid to bring Rich Wilde's tales to life. As he descends into the underworld, the pharaoh, a phoenix and the pharaoh, and then Anubis, the god of jackals who is the god of afterlife. Each is exquisitely painted by rich tones of jewels, with gold accents.

The same attention to details extends to images on the lower digits of the tablet, which are in perfect harmony with the traditional Egyptian theme. They are reminiscent of the elaborate gold items which were placed in the tombs of each Egyptian ruler.

The symbols are displayed on a grid of 5x3. This means there are 5 reels that have 3 rows.

It's a classic slot with a 5-reel and 10-payline, with the possibility of playing on just one payline or th
e entire the ten. Of course when you are playing, the higher chances you have of winning the most lucrative prizes available on this slot.

There's a broad range of line bets available to choose from, starting with the minimum bet being 0.10€ with a limit wager of 50€. This adaptability makes Book of Dead an attractive game for players who are just beginning to learn about slots gambling, as well as players who want to bet the cash and place bets of a large size.

The more the line bet is, the greater the reward that is why these slots popular with high rollers.

It is a high-risk slot, meaning there are more risks for players - and more lucrative rewards as well.

The winnings are paid out by way of multipliers for your line bet. There is an average jackpot of 250,000 coins when you win 5 maximum bets on rich Wild symbols.

Payouts are made in order from right to left with the exception of the Book of Dead scatter symbol that pays at any point on the reels and has 200% multiplier for bets.

The higher costs are typical from a game with high volatility such as Book of Dead. While you'll be able to win them more rarely, the payouts are usually worth the waiting. It requires a significant amount of money and steel nerves - to get the most out of the high volatility of a time such as that of Book of Dead.

The entire set of settings, including stake, Autoplay, Paytables and Game Rules are easily accessible in the game menu providing you with a lot of control over the way you play. You can choose autoplay spin options of 20 to 500, and also set the guidelines for how they're performed so that you do not lose out on a huge jackpot.

It is also possible to turn the sound off and on or set an auto bet. You can also choose a game that is quick or enable left-handed play when the game's menu and controls switch from left to right. This is a thoughtful and welcoming element of design other companies could adopt.

Making a winning combination with Book of Dead is all about matching three or more symbols on the payline. The highest paying symbols such as Phoenix the Anubis symbol, Pharaoh as well as Rich Wilde himself - pay out when you hit just two symbols along the payline.

The game is actually focused on what's known as the Book of Dead. It's the symbol you're looking to get as it acts as a scatter, and gives 10 free spins when you get three or more scatters in the game. The game also pays up to 200x in bonus and are the source of some of the highest winnings on the game.

Free Spins
When you are awarded Bonus Free Spins Bonus the symbol on the pay table will be randomly selected and then become an expanding symbol. In the course of free spins of 10 times, be sure to watch as the chosen symbol expands to fill the reels, and pay out prizes in abundance.

The bonus of free spins is among one of the highest-paying bonuses of all the bonuses, but it also functions as a wild, allowing an extremely tasty base game winnings. You're not likely to get it frequently However, you'll know that when the third book is released it will be worth it!

This book-wild symbol allows you to create profitable combinations across the paylines. All of them pay you the exact amount of the line bet.

There is no progressive jackpot offered, but the prize at 250,0000 coins is huge. If the reels are aligned and you win five Rich Wilde symbols on a payline, you've won the jackpot.

A quick glance at the paytable revealed that this is probably an extremely volatile game and we therefore placed our bets on the lines exactly where we'd probably bet should we actually be playing. This is why we placed our coin's value to 1 and our coins to 3 to make an amount that was 30.00 every spin.

Autoplay As Well As Quickspin

Also, we set the autoplay settings to 250 games. There is no choice in between the 100-250 games. We switched on the quickplay option and then began to play it.

While our test participants were all right-handed, we adored the possibility of playing with your left hand that switches games and buttons for menus to the opposite aspect of your laptop's display.

Evidently, due to the high-risk nature of this slot game , there were periods of time when there was no action at all. We believe this lets you take in the stunning graphics and incredible sound effects. However, when we reached the game's base winnings, we were all above the 100-coin mark and 570 coins for a wild-card combination that includes two book-related symbols.

We also won the free spins bonus two times in our 150 spins which we believe was likely a little higher than the average. When we played with both the 10 and Q as expanding symbols and a multiplier symbol, we earned more than three hundred dollars in profits. It was the most significant base game win , with 570 coins, we earned more than 5,000 dollars during our 150 spins that were pretty normal for a slot with a high volatility such as this.

"The Book Of Dead" FAQ

Can I play The Book of Dead for free?

You can play this great Eyptian themed slot for free here at Wunderino. Free play allows you to really get a grip on the game, allowing you to decide if it has the mix of gameplay, bonus games, RTP and other features you are looking for in your favorite slots.

Does The Book of Dead offer free spins?

Yes, there is a bonus of 10 free spins when 3 or more book scatter symbols land on the reels. During the Free Spins feature, a random symbol will expand to fill the reels, offering huge opportunities for forming high paying winning combinations.

Any tips for playing The Book of Dead?

There are some general hints and tips that apply to playing any slot machine. It goes without saying that it should always be played for fun and not as a way to pay bills! Also: -Take the time to review the rules, payout percentage and paylines before spinning so that you are familiar with all of the slot's features. - Always set a budget and stick to it and when you've played it through for the day, be ready to "go". - Take frequent screen breaks and get some fresh air. - When you're on a winning streak, always take a break and split your winnings half and half between your bank account and your bankroll.

If you're looking for the best online casino slots to play, then you've come to the right place! Wunderino offers a variety of great casino games to choose from!
Take your chance and try some other awsome free games like Lightning Roulette, Dinopolis Jokers Jewels, Beat the beast krakens lair slot, Phoenix arising.