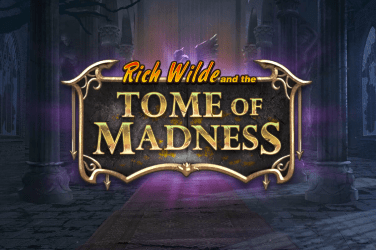 Tome of Madness online is a well-designed slot. At first, it is not so easy to get a grasp on the rules. Wins are formed away from any paylines by clusters of at least 4 main characters standing next to each other. Each winning combination resolves and new tiles fall from the top.

In this game there are several wilds with special abilities:

The Expedition Guide substitutes for the standard symbols and acts as a x2 multiplier.

The book is a special wild. It can trigger special functions.

A one-eyed creature is the Mega Wild, which occupies 4 spaces simultaneously. This symbol appears only in the bonus round.

Before each game round, a field may have been marked. If the character in the marked square is destroyed by a combination, then two Special Wilds are added to the playing field.

In the bonus round there are several marked fields. If all the marked squares are revealed, the Mega Wild appears.

The portal fills up with destroyed characters from a combo and triggers special functions:

From 41 characters - OTHER WORLD FREE ROUND is activated

Especially in Germany casino games are played reluctantly without real bets. This slot could become a real goldmine when real money is used. In the base game the yield is comparatively meager. The biggest winnings can only be cleared if you manage to trigger the Mega Wild. In any case, this slot is one of the recommended games for real money.

Tome of Madness by Play'n GO is a new type of slot that is built on a 5×5 grid set. There are no reels and paylines. Winning combinations are formed by clusters. You can look forward to an innovative game system with lucrative bonus features.

The game is completely up to date and you get poignant animations with mysterious sounds. In the background you can see an abandoned cathedral. Apparently, you are going on an expedition, hunting for gems, ancient goods and superhuman creatures. The expedition leader is the only human figure in the game.

On Wunderino onlinecasino you can play Tome of Madness for free without registration. In the game selection you can also find many other slot games in the demo mode. With a few clicks you can switch to a competent online casino and start playing for real money.