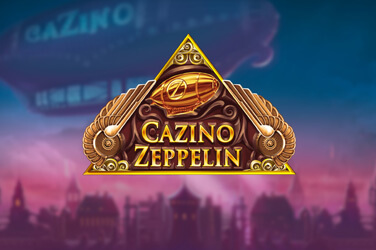 The golden time of Zeppelins is the theme for this gorgeously designed slot by up and coming manufacturer Yggdrasil. It is, in fact, slightly steampunk as well as the amazing costumes of Victorian inventors gracing the reels. There's just one main aspect in the game, and it's an extremely good one. Free spins feature transferring or stuck wilds which could yield several winnings. The combination of the visual effects along with smooth and professional game gameplay, and movie-style music creates a great slot.

The backdrop of these reels, you can see an enormous Zeppelin in a hazed-over town and spotlights illuminate the airship. The reels are translucent and the symbols above them are crisp and clear. The reels are filled with characters that blend airships and casino games. For instance, there is a punk-looking man in green pantsuit, throwing dice and a dark-haired person holding some cards. Other symbols include the insane looking pilot as well as the woman in the jester-lined headdress.

If you spin the Cazino Zeppelin machine, it is very fast it is very exciting particularly with the auto spin feature. The music changes in pitch and volume as if it were the soundtrack for the film, and increases in intensity when certain times (for instance, when you wait for the third Free Spins icon). Animations are fantastic and also include sparks flying across each reel from the top of it to the bottom.

Alongside those Cazino Zeppelin's free spins there's also wilds present - but as with all Yggdrasil slots the focus is on the gameplay instead of a lot of games with gimmicks or breaks out features.

The win lines of this online live casino game have been set at 20. However, you have plenty of freedom in deciding the size of your bet. It is possible to bet as little as 1c up to 50c on each line, giving players a 20c to EUR10 per spin. There are options for time, speed, as well as background noises as well as an auto-play option that allows as many as 1000 rounds at once.

A man who has a small head, pipe and hat is the symbol that has the highest reward. This amount is worth 2000 euros for 5,300 for 4, as well as 40 coins for 3. The dice man is next with 1,000 coins, followed by the card player earning 500 and the pilot 500. The smaller wins are accounted for by the suit of cards that are decorated to match the overall theme.

Wilds are the lady in the jester's hat. These can be substituted with any one of the symbols listed above to form winning combinations.

There's only one additional icon on reels. It is the bonus game of free spins and it's a badge that has the words "free spins" as well as a zeppelin. The game awards 40 coins when you have 2 or more and with 3or more, you will also get 10, 15, or 20 free spins at 3,4, and five respectively.

Yggdrasil is pushing the boundaries in the game design and gameplay of slot machines. The symbols featured on this slot and the way the background sounds and music come together are fantastic. There's the possibility of huge wins with the wilds that are present in regular playing, however the free spins feature is where the real action takes place. With sticky and transferable wilds, and the chance to trigger retriggers when you play, that's where the possibility of huge winnings is.

I highly recommend this slot as a great way to get a taste of the kind of games Yggdrasil are capable of creating. I'm sure that after playing this one you'll be tempted to play more of their classic slots.