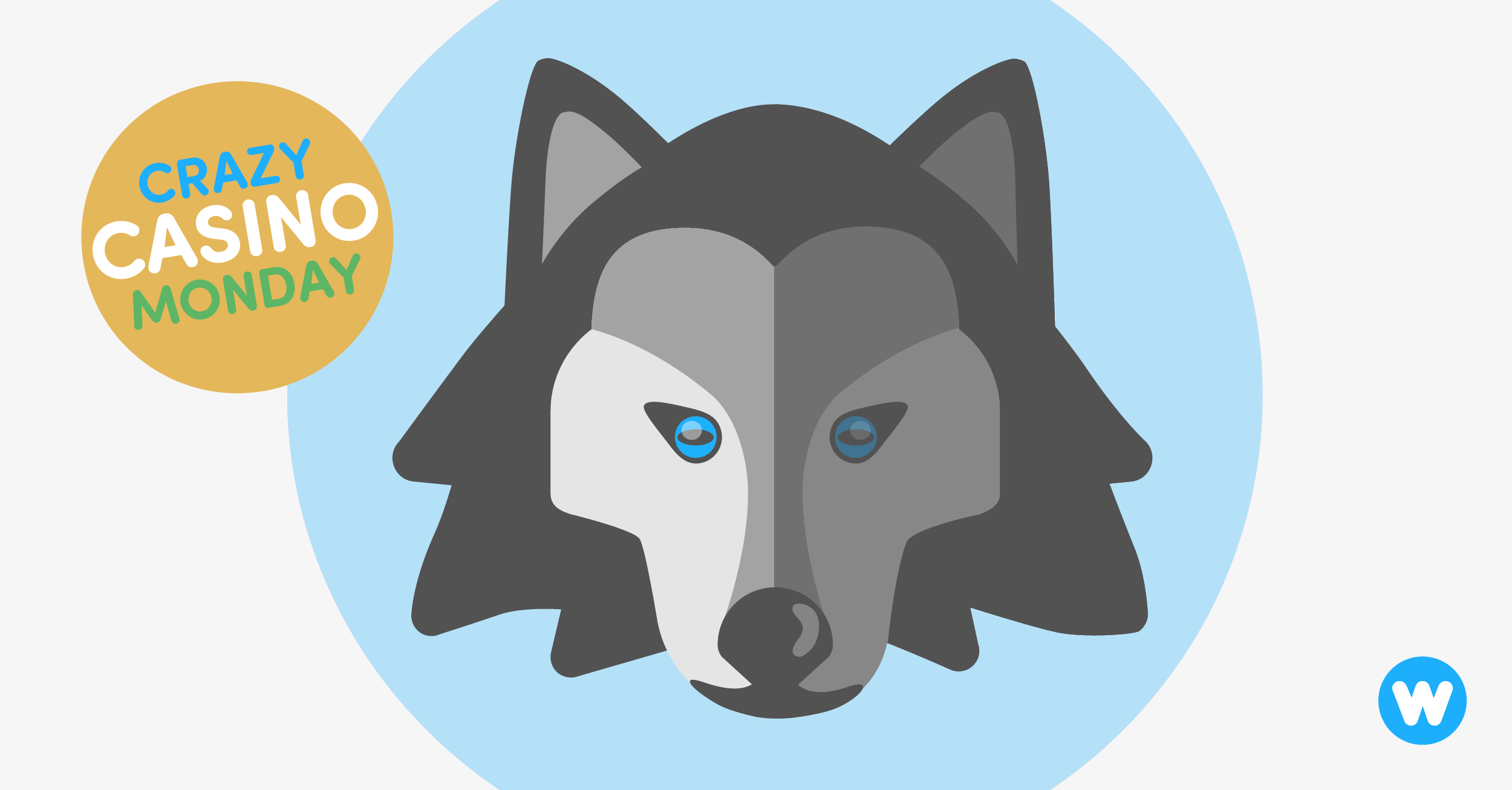 Many myths are entwined around the wolf. He is considered a powerful shamanic animal, which appears in the legends from all over the world. The wolf symbolizes wilderness, strength and excellent instincts. We have selected three free slot games in which the mysterious wolf plays the main role. Read on and find out more.

The cooperation between Microgaming and Just For The Wins has already resulted in some good games. Slots that multiply your bet by a factor of 25,000 still remain a rarity and are worth a try for that reason alone. Wolf Howl is a classic slot set in the Indian wilderness of North America. Those who dance with this wolf can look forward to two things: higher volatility and big wins.

The design of Wolf Howl relies on popular and well-known motifs: North American flora and fauna, with the wolf taking center stage. The game symbols line up with moose, bears, eagles and rabbits in the North American wildlife. On the deep red reels you will find rabbits, eagles, brown bears and of course the wolf. The most rewarding standard symbol is the moose, which can triple, sextuple or even twenty times your bet. Again, wolf comes up trumps. It substitutes for all standard symbols and pays 5, 10 or 30 times your bet if you land 3, 4 or 5 in a combination.

Forget about the stressful everyday life with the North American nature slot "Wolf Howl". Wolf Howl is a slot that impresses thanks to high volatility and huge rewards. Considering that the jackpot promises 25,000 times your bet, it is rather recommended to experienced players for casual players Wolf Howl might be a bit too risky. All in all, though, Wolf Howl is a solid slot game that is worth a spin.

If you want to trade in the everyday gray for a mysterious world where terrifying creatures dwell, Wolf Hunters slot is just the ticket. Wolf Hunters is a 5-reel, 20-payline slot from Yggdrasil Gaming that can be played on all devices.

Visually, Wolf Hunters is one of the most appealing slots in recent years. Set against a backdrop of old, spooky buildings in the mist of the night, a terrifying beast terrorizes the town – until two werewolf hunters get in its way.

There are eight basic symbols in this game. Low value symbols include blue diamonds, green crosses, purple spades and red hearts – all placed on a wooden board. Also look forward to four premium symbols: Stakes to kill the werewolves, traps to catch the wolves, plus poison bottles – and the dreaded werewolf himself. Look out for the werewolf, which is the highest paying symbol and appears on all reels. If the werewolf is on the reels in the base game, a random hunter will attempt to attack it. If the attack is successful, that hunter will receive one rage point. Once either hunter reaches 100 rage points, the rage free mode is triggered.
Fans of fantasy horror stories will love this spooky video slot from the creative Yggdrasil studios. The special features bring plenty of excitement to the game and lots of chances for juicy payouts. Everything you want from a video slot can be found in Wolf Hunters. But beware: Due to the creepy factor, this game is definitely not for the faint-hearted …

Wolf Heart is a slot game from 2 by 2 Gaming software, based on eight reels and 60 paylines. It plays skillfully with medieval motifs. However, Wolf Heart differs from many other games in more than just the layout.
The design is heavily inspired by classic fairy tales and medieval legends. Among other things, you will meet the bold hero, his fair maiden and of course the wolf on your adventure. The action takes place – how could it be otherwise – around a big, old castle.

Wolf Heart plays on eight reels and 60 paylines. The reels are arranged differently than in the usual slot games. Thus, on the left side there are two reels consisting of six rows, and on the right side there are two 3×3 reels arranged one above the other. The game may seem confusing at first, but that’s also what makes it so appealing. Namely, the unique arrangement means that there are several special winning opportunities. Of course, the first two reels will be the same for every single row or line combination you get. Many symbols can also be stacked on top of each other, giving you the chance to win multiple times in just one spin.

The daring knights act as the wild symbol. The golden wolf symbol is used as a scatter symbol. These can appear anywhere on the screen, with up to eight possible at once.

Individual pieces are often stacked on top of each other on individual spaces on the board. Depending on the strategy you play with, you’ll have better chances of maximizing your winnings. To win, three or more identical elements must be combined on one line.

The most interesting thing about Wolf Heart slot is that you can get up to 60 free spins. You need at least three scatters to activate this feature. The more scatters you have, the more free spins you get. The prince and princess become wolves during the feature. They are also the wild cards that form winning combinations.

The style of Wolf Heart is quite different from that of many other slots. However, don’t let the unusual look of this slot confuse you. Wolf Heart could be just the thing for you if you’re looking for an innovative online slot that simply offers something new.

Which wolf slot is your favorite? Try Wolf Howl, Wolf Hunter and Wolf Heart for free on Wunderino. Maybe you too will howl with happiness soon?

Click here to visit our homepage and our mega assortment! In addition, regular free spins and bonuses are waiting for you at Wunderino and on the Wunderino app. Interested? You can find all information at: wunderino-test.de.