Slot of the month: Tarzan and the Jewels of Opar 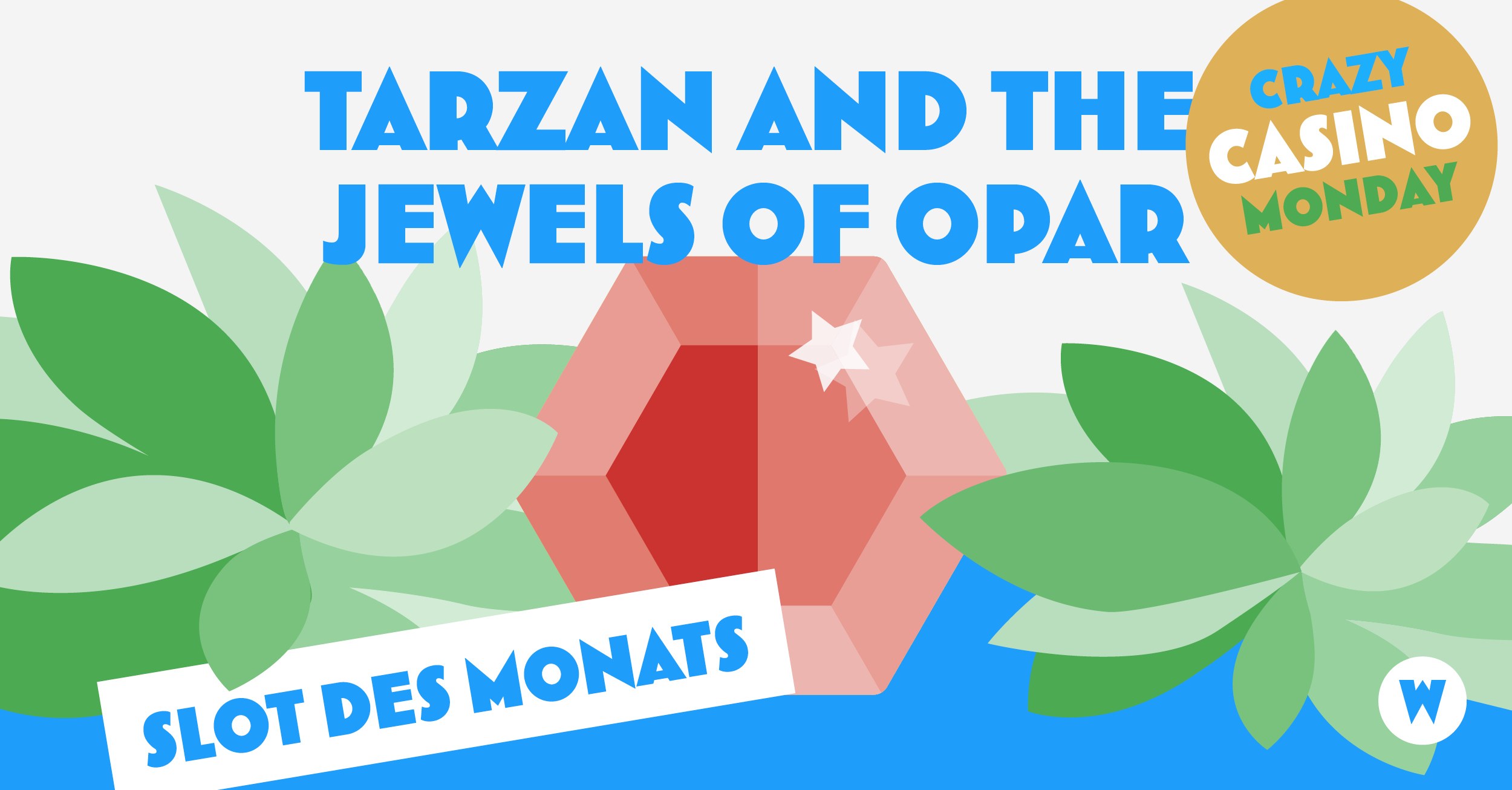 In October we take you to the jungle with the Wunderino slot of the month. We proudly present: Tarzan and the Jewels of Opar, our slot of the month. Starting October 6th, you can get into the fun with Wunderino – before anyone else. Microgaming made the mega coup in 2016 and secured the rights to the story of Tarzan. That blockbuster slot is now followes-up by Tarzan and Jewels of Opar: Fun is guaranteed.

Edgar Rice Burroughs and Tarzan of the Apes
The story of Tarzan is probably known to everyone through various film adaptations and interpretations – at least the one that first flickered on the screen in 1918. The big game hunter James Parker wants to make big loot in Africa and is looking for the legendary graveyard of the elephants. He is accompanied by his daughter and her fiance Harry. Suddenly the ape-man Tarzan swings through the air, grabs the pretty Jane and lifts her up into his tree house. Everyone knows the story: fear turns into trust and trust turns into great love. "Me Tarzan, you Jane" are not only his first words – they are probably one of the most famous quotations in film history. The script was based on the Tarzan of the Apes books by the American writer Edgar Rice Burroughs. The first of them was published in 1914 – 23 more followed.

Tarzan and the Jewels of Opar: The Book Template
The material for the slot of the same name is provided by the fifth part of the Tarzan saga. Because Tarzan has financial problems, the ape-man returns to Opar, the lost colony of the legendary Atlantis. Incredible treasures are hidden there, but only Tarzan knows their exact location. But the gold-greedy Belgian officer Albert Werper and his Arab accomplice are hot on his heels. In Opar Tarzan loses his memory in an earthquake in the treasure chamber because he is hit by a stone on his head. A tumultuous roundel begins around a Tarzan with amnesia, a high priestess who wants to have him murdered because of disdained love services, and a Jane who in the meantime is kidnapped by the Arab, and and and. Stil on track of the situation?

The Slot Tarzan and the Jewels of Opar
Our slot promises much less chaos, but is at least as exciting. Because one thing the game and the book definitely have in common: there are considerable treasures and riches hidden behind doors, gates and in chambers. Just as in the book only Tarzan can lead to the treasure, it is he who is at the top of the payout table in the slot. A row of five here promises up to 37.5 times the stake. Set against the backdrop of the African jungle, Tarzan and the Jewels of Opar runs over five reels and three rows – paylines are 20. Numerous bonus features, unexpected twists and turns, dazzling colors and a fantastic design also promise to make the game fun in a class of its own.

The Developer
The slot was manufactured by Gameberger Studios, a vendor of Microgaming. For the developers, the focus is not only on creativity, but above all on technical innovation. We are curious to see what else might come.

Conclusion:
Whoever likes the story of Tarzan and Jane will love the slot. It is so varied, exciting and thrilling that it was immediately clear to us at Wunderino: this will be our slot of the month. And you can play it from anywhere – whether comfortably at home on your PC or outside with our Wunderino app. So don’t wait long: the slot offers numerous bonus features, regular __free spins and bonuses__ are sure to be hidden away too. Enjoyyyyy!