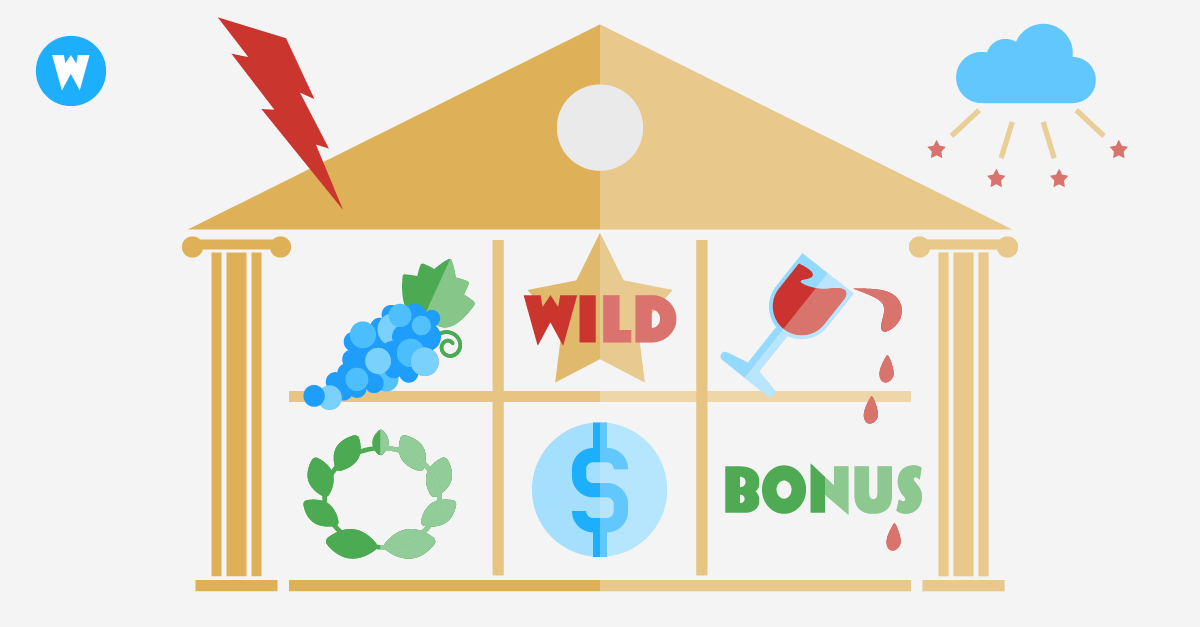 Whether it’s tension-filled gladiator fights, poker or slot games – gambling has always fascinated mankind. Since this enthusiasm doesn’t seem to go out of fashion, we at Wunderino take you on a journey through time to the beginnings of gambling.

The ancient world is known for its extravagant festivals, rituals, philosophers and stories about old gods. So it is not surprising that gambling was already practiced in ancient Rome.
Gambling, gamblen, betting, as the vernacular calls the game for the favour of Fortuna nowadays, was actually forbidden at that time and was considered a trivial offence. If one or the other follower was caught, he usually had to pay only a small fine. Gambling was particularly popular among Roman mercenaries. In dark taverns lit by candlelight, they bet their money on dice results. The motto "who does not dare does not win" was already valid at that time. Of course, cheating was not welcome in those times either. Small towers on the gaming tables were therefore supposed to ensure fair play. The participants threw their dice at the top end of the device. This was how chance decided which number would win.

The Roman tavern, the forerunner of the casino

Gambling was then as now a spectacle. The Roman tavern was a forerunner of the casino, so to speak. Who would have thought it? But the wooing for Fortuna’s favour did not only take place in the pubs of the common people. Politically powerful personalities were also passionate gamblers. Both Emperor Claudius and Emperor Augustus were passionate gamblers. And because the ancient Romans were not averse to extravagant festivals and affairs, there was one major exception in the year: Saturnalia. On this day everything was allowed, where otherwise the ancient Roman society, the moral club swung. And so, on this special day of the year, the Romans were able to indulge in gambling without a guilty conscience or penalty. A Guilty Pleasure free house, so to speak. And the best thing about it: On this day in the Colosseum and all the arenas of the Roman Empire, the citizens could bet on their favourite among the gladiators, which was not allowed the rest of the year. We at Wunderino find this incredibly exciting – gambling and then in a 1A location. If Wunderino would have existed back then, you could have placed your bets that day. How high were the stakes at gladiator fights?

By the way, if you are a passionate sports fan and like to bet on your favorite athlete, come to our Wunderino sports page.

Rome – known as the eternal city. It was founded in 753 B.C. and developed into the capital of an important empire. Even though these times are long gone, the breath of antiquity still remains exciting. This is exactly the reason why we present you the Golden Rome game. It radiates the esprit of the empire on the Tiber like no other slot game. The game operators of Multicommerce Game Studio have not let themselves be sidelined: Rome and its imposing monuments are presented in an impressive way. Sand-colored amphoras, green cypresses and elegant marble columns underline the atmosphere of the city and transport you back to the era of Roman prosperity. Add to this the easy handling in combination with the authentic graphics. We at Wunderino think that fans of the ancient world will definitely get their money’s worth with this game.

The game is structured as follows: With its five reels and 40 paylines, it has a classic structure. But before you start playing the Golden Rome slot, you decide how much you want to bet per payline with the "Bet Per Line" meter. The 40 paylines are mandatory, so your total bet per line times 40, and to start the game you simply click on the "Spin" button. With the "Max Bet" function you bet a sum of 20 Euros per game. So, this was more for the strategic players. You don’t want to worry so much about it, but rather start playing right away? Then simply use the autoplay function.

Replace your profits with Caesar

So, now for the winning options: If you want to win big in the game, look for the Caesar symbol. With it you can replace the other pictures in your row and thus increase your chances of winning. Dusting for money is great – but so are free spins, right? Got curious? Then you should be alert when the Colosseum appears in your rows. Because three of them next to each other will give you fun for 12 free spins! Sounds great, doesn’t it? But it gets even better: If you are one of the lucky ones and see five Colosseums in front of you, you get to play 40 rounds on the house. Fantastic, right? That’s how slot game gambling is really fun. You can’t wait and want to get into the fun right away? Click here for the game.

In Greek Gods, Zeus leads you to the win

Even the ancient Greeks were avid gamblers: the temple of Athena Skira and the Pirenean fountain of Corinth were considered famous places of gambling. According to mythology, the messenger of the gods, Hermes, supported gambling. For the gods themselves are also said to have been passionate fans. For example Zeus, Hades and Hera. Exciting, isn’t it? The game manufacturer Pragmatic Play therefore offers the game Greek Gods. Five reels, three rows and 243 paylines – and on top of that, quite high odds of winning. The maximum prize is 125,000 euros. At the beginning of the slot, the father of the gods Zeus appears with his laurel wreath and sceptre, surrounded by large, playful clouds. This is how the ancient Greeks must have imagined the home of their sky lords.

The winning rows of the slot "Greek Gods" appear inside a Greek temple, which is decorated with golden and filigree ornaments. We at Wunderino think: this thing is a real eye-catcher and makes you want more! Together with the sound of lutes you swing yourself into the heavenly game, like a Greek god. Getting into the game is super easy: You pay only 0.25 Euro, which is an ideal start especially for timid players. With a payout rate of 96.5 percent, you will most likely get your stake back from the slot. Wow, those are prospects!

The following symbols may appear on your reels: five numbers, letters and a Kantharos, which is a Greek vessel, as well as a harp and the gods Hera and Zeus. The wild symbol is a golden symbol with the inscription Wild. It replaces all other symbols and increases your chances of winning. If you like to spin a few rounds on the house, the lightning will allow you to do so when it appears in your five reels side by side. As soon as you receive a stack of Wild, you are granted an instant win. This can be a 50x cash prize, free spins or the wheel of fortune bonus. For example, you could win up to 1,000 Euros on a bet of 20 Euros! Wow, that’s what we call a fat prize. "Greek Gods" offers exciting items from Greek mythology, great chances of winning and a lot of fun. What could be better? We at Wunderino love the game, so we warmly recommend it to you. If you are already a fan of the game, then click on it and try your luck! Click here for Greek Gods.

A time travel with Wunderino

The live event "Bread and Games" was an important event in ancient Rome. Every citizen was allowed to attend these free games. Caesar and other Roman rulers used them to catch votes for themselves. Even today, the bloody battles of the ancient world still thrill the masses, as well as in the Hollywood movie Gladiator. But that Rome and Athens were the scene of the gambling is probably known to very few people. Yes yes, the ancient Romans and Greeks also took on Fortuna. With the slot games Greek Gods and Golden Rome we take you back to the old times in an impressive way. Because here you will encounter imaginative graphics and gaming fun par excellence. In addition, there is a lot of fun and winnings in it for you.

You’ve got gaming fever and can’t wait to get started at Wunderino online casino? Well, come on over and get started. You are only one click away. And remember, there are regular free spins and bonuses waiting for you. Are you on the road right now? No problem: just download the Wunderino app and start playing at your personal mobile casino.