UEFA European Championship 2020: Who are the favourites for the title? 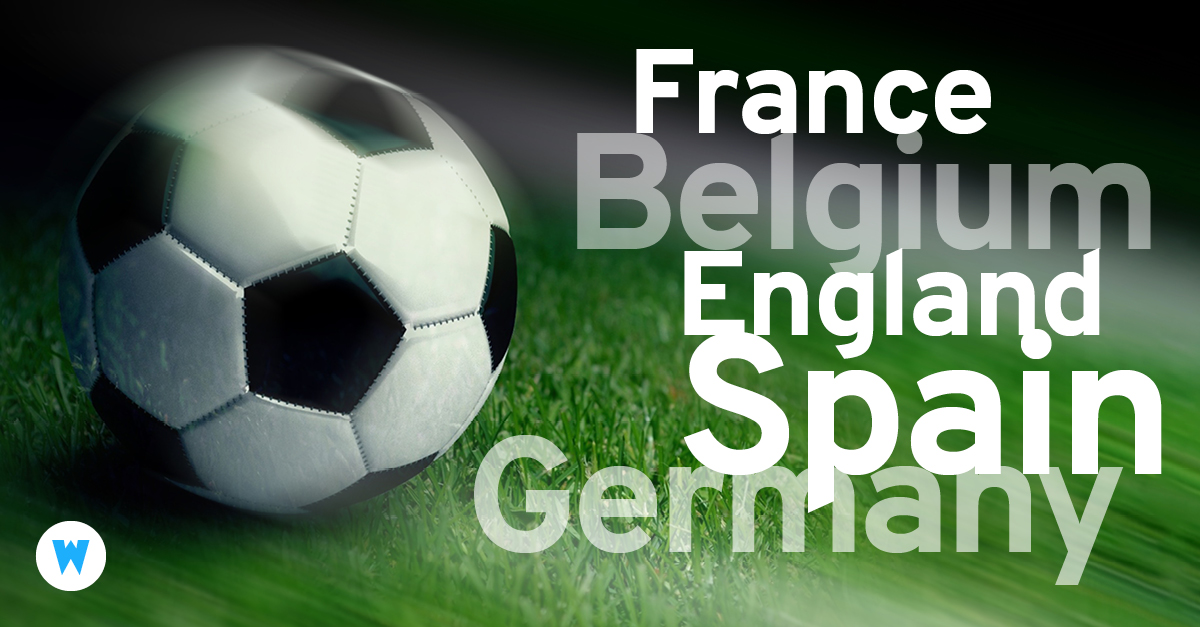 Welcome to the third and final part of the Euro 2020 qualifier analysis. The third part is slightly different as it looks at the strongest contenders to win the entire competition. Additionally to looking at what makes the contenders exactly that, contenders, we will look into potential dark horses of the Euro 2020 football championship. If you are interested in parts 1 and 2, they look at the odds of the qualification rounds for the main competition.

France – A one off fluke or a genuine world class team?

First up is the World Champion France. Without a doubt the frontrunner to win the Euros. France’s current national team has some of the most deep squad roster that any national team has arguably ever seen. On a good day France’s third choice roster could easily compete for a top 4 spot in the Euros. That third choice roster would see the likes of Arsenal’s Alexandre Lacazette, with his one of the most prolific conversion rates in Europe, Upamecano, one of the hottest defensive prospects in Europe, and Manchester United’s Martial an up and coming young striker. And this is just their 3rd lineup, their squad depth can field FIVE, yes FIVE, full starting-11 lineups.

Having won the world cup and returning to its former glory, Didier Deschamps’ France has a 7/2 odd of becoming the football champion of Europe. Having had the opportunity in 2016 where they lost to arguably the dark horse of that tournament Portugal, France is eager to avenge their loss and tuck a European trophy into their silverware cabinet.

How many years has the English national team been hyped up and ended up being a let down? For the first time in many decades, the country with the most competitive football league, has a roster that could make it all the way. Showing a solid performance at the 2018 Russia World Cup, reaching the semi-finals only to lose to the dark horse of that tournament Croatia.

Seeing their performance at the qualifiers and their recent run in the world cup, bookies are giving England the odds of 11/2 to steal the trophy from the in form France. A France – England final is something that could very well take place given they are placed on opposite ends of the knockout table. However, looking at the English past, even though they finally have a strong roster, they know how to underperform. So be weary.

Belgium – A generation of superstars

An amazing generation of players consisting of world stars like Kevin De Bruyne, Thibaut Courtois, Youri Tielemans, and Romelu Lukaku are available for the Belgian Red Devils. Having placed 3rd in the 2018 World Cup, the Belgians lost to the eventual winners France, showing incredible composure and will to win. The team has been dominating their group in the qualifiers and are easily touted as a team that could cause an upset for either France or England or both.

The starting 11 offers Belgium an incredibly strong lineup. However, unlike Frances stupendous five team roster depth, the Belgians don’t have as strong of a bench. Heavily lacking in the defensive department. Although where they lack defensively they make up offensively. They have a solid 8/1 odds of winning the Euros.

The once unbeatable Germany has declined in their performance recently and has been underwhelming to many. The 7-1 thrashing of Brazil in the 2014 World Cup finals seems a distant memory. However, in Europe there are not too many teams that can challenge the top echelon and even having declined in their ability, the BundesRepublik can still field a team filled with World Cup winners and world star players.

Hence, the bookies don’t believe in Germany as much as they do in England, although Germany has been far stronger in recent history (excluding the 2018 World Cup). Placing them in the same bracket of 8/1 odds with Belgium and our fifth and final candidate.

Spain – The change of old guard

Nobody expects the Spanish inquisition. Except that a lot of countries do and Spain, just like Germany, has fallen from their grace and are no longer considered the main team to win it all. And just like Germany, the roster is filled with both World Cup winners and up and coming talents which have the opportunity to prove themselves. With the likes of Iniesta and Puyol being retired, the Spaniards have lost some defensive prowess, but still are filled with superstars like Paco Alcacer, Jordi Alba, and Sergio Ramos.

With a newer generation of players and a recent fall off in form, the bookies place them together with Germany and Belgium. They are in a similar situation as Germany are and they will be interesting to follow and see how the youth and national team develop and if they can cause an upset at the tournament.

Dark Horses – The ones to watch

There are three dark horses for the tournament. The Italians, Croats, and Portuguese.

First to the fallen champions, the Italians. With a complete collapse in the qualifications for the World Cup in 2018, the Italians have had a very turbulent time in football overall. Being a football nation, however, and having produced some amazing talent over the past 5 years, Italy can fly under the radar of many people as a potential contender. Having an easy group has not helped the Italians though, as it has not helped them prepare for the challenges they could face once they qualify (which they are almost guaranteed). This could both prove to their advantage, making other teams underestimate them just as Croatia was at the World Cup, or to their detriment as they may not be in the right mindset when they will face tougher opposition. So the Italians are a coin-toss for many.

The Croats on the other hand have shown that they are capable of playing their hearts out. Having their fairytale run tragically ended by France at the World Cup in the finals, the Croats have proven that they have a roster, albeit an aging one, that can compete versus the goliaths of the football world. However, they have struggled a little bit against mediocre opposition in the qualification already. If they show up as they did in the World Cup then you can expect many upsets from this team.

The final team is the current holder of the European trophy, Portugal. You may be wondering why aren’t they the frontrunners, considering they won the whole competition 3 and a half years ago. Well, just as last time, Portugal was not considered a frontrunner to win the competition and they out performed against everyone. Although having one of the best players in the world helps a lot. You shouldn’t count Portugal out but considering how dominant France and England looked in the World Cup, it may be hard for them to become back-to-back European champions.

Are you interested in predicting football outcomes? Would you like to put that to a test and potentially earn some money using your skills? Then head over to Wunderino Sports and begin your betting career! You can find all the top leagues in Europe, from the Premier League to the Bundesliga to Serie A. Not interested in football but rather ice hockey or maybe volleyball? We have that too! So why are you still here? Go over and test your analytical skills and make some money!