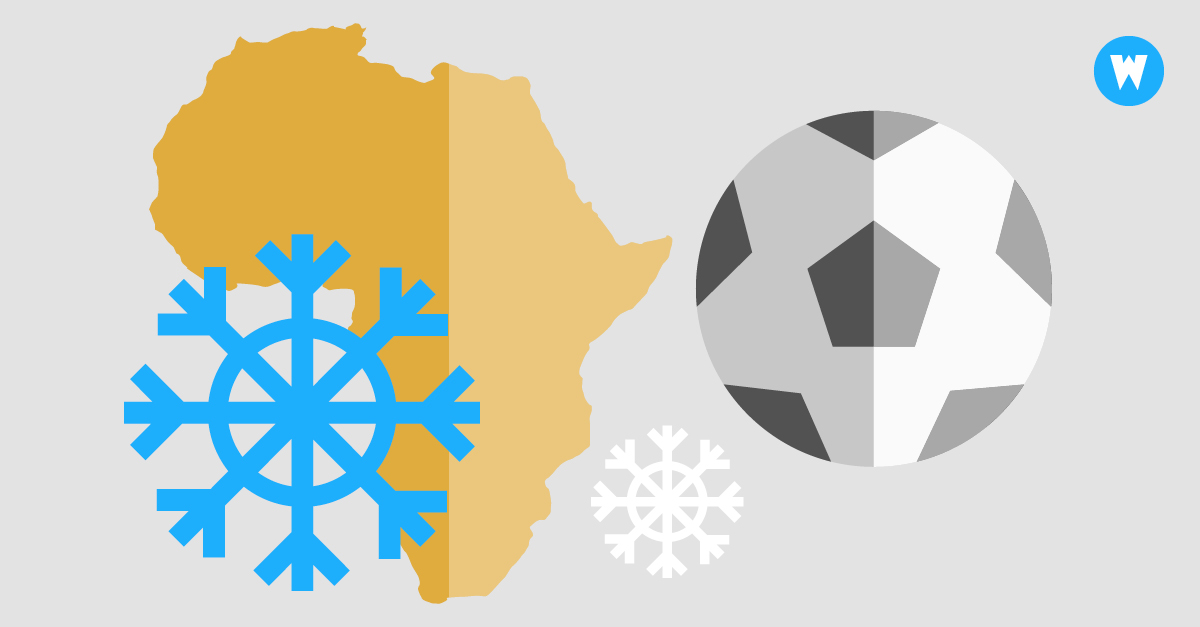 It is well known that miracles can and sometimes do happen in sport – leading goals in the last second, incredible catch-ups in tournament finals and goals scored as if by magic. The nice thing is: You can earn a lot of money with all these things – provided, of course, you have the right feeling for the dynamics of the sport and a little bit of luck. Well: Sometimes – in special exceptions – luck is the only thing you need.

So there are events whose betting really doesn’t require any knowledge or know-how, but is merely based on chance. If these bets then combine the occurrence of almost independent events, it becomes really difficult, almost impossible – and the odds shoot into the thousands.

In our column "The 10 craziest football bets" we introduce you to the coming weeks of betting, which not only requires a lot of luck. Today we start with the first three crazy football bets:

Snow at the 2010 World Cup in South Africa

At the 2010 World Cup in South Africa, you could bet that it would snow during a match – the last time this happened was at the first ever World Cup, held in Uruguay in 1930. At that time, the opening match between France and Mexico (4-1) was played in a blizzard. So why not in 2010 in South Africa? Well, it’s winter in South Africa in June and July – but snowfall during a match is unlikely at an average national temperature of 12° Celsius. For a correctly placed bet, the bookmaker at the time would have paid ten times his bet.

Pope Benedict sings "We are the Champions" on St. Peter’s Square

Our next bet also revolves around the World Cup 2010 – more or less at least. In fact, there was one bet that linked the World Cup with another – admittedly relatively unlikely – event: If Germany (semi-final out) had played and won against Italy (preliminary round out) in the final of the 2010 World Cup and Pope Benedict (Germany) would have voted for the classic "We are the Champions" on St. Peter’s Square (in Rome, Italy!) – in the case of a correctly placed bet, you could have skimmed the winner’s bones. Had, had, bicycle chain: Quite a few conjunctions in the last lines, don’t you think? Hence the relatively high odds of 1:2000, which would have rewarded correctly placed bettors. From a German point of view, it is well known that neither the one nor the other event took place.

The dream of Leicester City

Probably the most beautiful young football wonder in history is – even three years later – the championship of the British first division team Leicester City. At the end of the 2014/2015 season, the "Foxes" were and remained only as sharp as a hair when they were relegated to the first division at a very late stage. So in the following season 15/16 they were regarded as an absolute underdog – and that was exactly what made them absolutely gold for risky bettors. In the truest sense of the word: on 2 May 2016 Leicester was indeed – contrary to all expectations – crowned British Champion with 81 points on his account. With a quota of 1:5000 this brought several fans and Gablern, which bet before season beginning on the title win of the young team, high five-digit sums. A really crazy bet of a real football miracle.

Enough theory! Do you want to bet on high odds and achieve great results yourself?
On Wunderino Sport you can also try your luck now – unbeatable odds, great challenges and rewards are waiting for you! In addition to access to betting on all kinds of sports – from soccer to basketball to hockey and cricket – you can also play in our renowned online casino.
So let’s get going, your next bet is just waiting to be placed!

You can’t get enough of our crazy stories on sports betting and gambling? Then we have some really amazing facts for you. They sound like Hollywood movies, but are absolutely real – the five most profitable casino scams.